CSSALT Team Builds CVA Simulator for Use in Resource-limited Environments 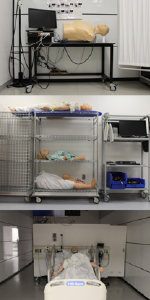 Sprawling across tables and counters, mannequins stare at the ceiling, eyes wide and mouths agape.

They make their homes among the countless wires and screens and tools scattered throughout the white, sterile rooms of the Center for Safety, Simulation & Advanced Learning Technologies (CSSALT). Silently, patiently, they wait.

They are simulators, and they represent valuable teaching tools in medicine.

Medical simulation allows learners to practice common, and uncommon, clinical scenarios in a realistic setting, keeping human patients safe while allowing learners to hone their skills. Opportunities to teach using simulators, however, rarely present themselves. These opportunities must be carved out of chaotic schedules, nestled among blocks of clinical care, research, and traditional education. Medical educators and those they teach are busy. Most simulators, though, are not.

The CSSALT team, under the direction of Samsun “Sem” Lampotang, PhD, Professor of Anesthesiology, has invented a simulator that avoids this problem by design — no instructor necessary.

The central venous access simulator mixes physical and virtual components so that clinicians can learn how to safely perform central venous access, or CVA, a technique for accessing the large, central veins leading to the heart. Funded by a grant from the Department of Defense, the simulator was built for use in austere, resource-limited environments, such as warzones, Dr. Lampotang said.

The device was made using a 3D-printed mold of a human torso, offering learners an opportunity to practice a variety of techniques on a realistic replica of the human anatomy relevant to central venous access. 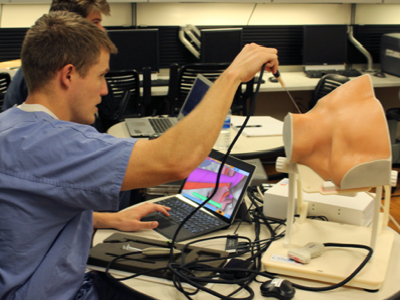 Access to central veins such as the subclavian vein can be crucial for patients with significant blood loss. This procedure allows life-saving drugs to reach a failing heart while traveling the shortest distance possible, according to Dr. Lampotang. A shorter distance means less time and fewer heartbeats, and in these situations, every passing second could bring the heart closer to a standstill.

Limitations in the field can prevent the use of traditional methods for accessing the vein. In cases where cervical injury is suspected, patients are placed in a head collar, blocking access through the internal jugular vein in the neck as is traditionally performed in civilian medicine. If a patient isn’t breathing, a surgeon will claim the neck for cricothyrotomy operation, leaving the anesthesiologist few options for accessing the heart. The recommended route in military medicine is via the subclavian vein, which can be accessed, as the name suggests, below the clavicle.

This procedure is tricky. Because the vein is blocked by bone, it must be performed using landmarks instead of the more precise ultrasound-guided technique. Opportunities to practice the technique are usually limited in civilian medicine, where the procedure is most often performed using internal jugular access with ultrasound guidance.

“Essentially, you become a novice. But you don’t have the means to practice it, especially if nobody warned you when you left the States,” Dr. Lampotang said. Even clinicians with decades of experience accessing the veins through the internal jugular may struggle to perform the subclavian approach correctly without the proper training.

It’s risky, too. Without the help of ultrasound, life-threatening complications like pulmonary or arterial puncture are not uncommon.

That’s why practice and mastery of the subclavian technique are so important in military medicine, and that’s what this device allows its users to do: practice until mastering the technique, even on the field. “Ultimately, it is about precision in needle placement,” Dr. Gravenstein said.

Of course, the simulator isn’t limited to use in military medicine. “It is potentially useful for anyone who needs to be precise in vessel location and access,” Dr. Gravenstein said.

The device was built to allow learners to study and debrief independently. Configuration is simple: Even someone unfamiliar with the device should be able to set it up within 7 minutes, according to Dr. Lampotang. From there, the simulator guides the learner through practice sessions, modeling internal anatomy on a laptop screen, and allowing the user to probe using a needle. This gives users the opportunity to improve on the mechanics of the technique. The software allows users to adjust the size of simulated vessels, Dr. Gravenstein said, offering learners a variety of realistic scenarios.

Not only is the device simple to operate — it’s also an efficient instructor.

“Between May and August 2018, we were able to train 250 residents,” Dr. Lampotang said. “If we were depending on human instructors? It could have been maybe only 12, one every week.” 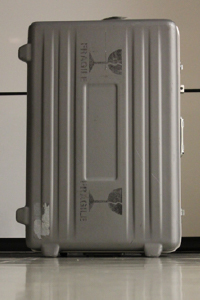 In building the simulator, the CSSALT team placed heavy emphasis on turnkey design. All components can be stored neatly in a designated box. With dimensions adding up to 60 inches and weighing in at about 50 pounds, the device meets airline requirements for checked luggage. Its portability allows for safe and easy transport, making it a valuable tool in an austere environment.

The simulator has traveled all over the world, including destinations such as South Africa, China, Canada, Belgium — and now, Iraq.

“I think it is a great concept device that can be useful for new and experienced providers,” Dr. Couperus said.

Medics, emergency medicine providers, and an anesthesia team have all tried the simulator. Those who had experience with line placements used the simulator to practice subclavian access, and one medic was able to successfully place the line after completing all the modules despite never having been trained in placements at all, according to Dr. Couperus.

“Overall, he really enjoyed being able to use this,” he said. “I think people like the learning/gaming aspect and the instant feedback.”

Dr. Couperus himself has also used the simulator.

“I really appreciated the ability to understand the relative anatomy in comparison to the physical model. I also really liked the immediate feedback regarding venous access,” he said. “This mode allows people with previous experience — but with limited opportunities to place these lines — the ability to maintain skill readiness.”

In the future, Dr. Couperus hopes the simulator can be adapted to help train medical providers in Resuscitative Endovascular Balloon Occlusion of the Aorta, or REBOA, an area that suffers from a significant training gap.

Dr. Lampotang said he expects the device to have a big impact on patients as well as the armed forces, reducing time spent in the hospital due to iatrogenic complications and allowing soldiers to quickly return to the front lines.

“At the very least, it will decrease morbidity because people aren’t learning on patients,” he said. “And eventually, I’m sure it will save lives.”