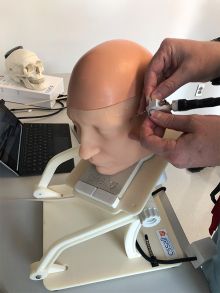 After a year of intricate development involving a partnership between Assistant Professor of Anesthesiology Cameron R. Smith, MD, PhD, and the Center for Safety, Simulation and Advanced Learning Technologies (CSSALT) engineers, a simulator involving a silicone head containing a 3D-printed skull is ready to teach residents, fellows, and faculty a nerve block technique for treating a variety of head and neck pain.

The pterygopalatine fossa block simulator, built over the past year with a grant from the I. Heermann Anesthesia Foundation (IHAF), is now ready for validation with trainees. Ultimately, it could be used to train providers in several UF Health locations on as many as eight other head and neck blocks.

Dr. Smith, the Principal Investigator, first became interested in the pterygopalatine fossa block for treating pain associated with cleft palate repair while in residency. Cleft palate repair is an exceptionally painful surgery for young children as it requires disassembly of the entire roof of the mouth. The pain is so severe that children typically cannot eat for 2 to 3 days postoperatively.

“I was curious if this could be modified to make the technique of executing it a little safer,” Dr. Smith said. He spent the next year and a half in the anatomy lab and pouring over anatomy books to better understand the space.

During his acute pain fellowship, he tried the pterygopalatine fossa block for the first time in a 3-month-old baby undergoing a cleft palate repair. The results were positive: Rather than spending 3 days refusing to eat, the baby was nursing by the time she was awake.

“She never reverted back to not eating,” Dr. Smith said. “The surgeon was stunned by this.”

The block caught on and quickly became among the most commonly performed block by the Acute Pain Service. But there was some hesitation about performing the block, which involves pushing the length of a 5-cm needle into a small space at the skull base.

“A lot of people were very nervous about them,” Dr. Smith said. Seeking a way to safely educate clinicians on the technique, he applied for the educational IHAF grant in 2018 to build a clinical task trainer with CSSALT.

The yearlong design process was one of defining learning objectives, said Travis Johnson, Manager of CSSALT. Those objectives dictate how complex the simulation must be to meet the objectives.

The highly detailed process involved extensive back and forth between Dr. Smith and the engineers as they redesigned hardware and software for the head and neck.

The team first worked with radiology to obtain high-resolution images of the head and face of eight patients for the physical model. A complex, high-resolution 3D model was required so that the intricacies of the human skull with its numerous fine bones would be visible in the mixed-reality software as well as present in the physical model. This was challenging because the segmentation process, or turning a 2D scan into a 3D object, was time consuming and required a significant amount of technical expertise to ensure each part of the 3D object was anatomically realistic.

Another challenge was texture. Ordinarily, a simulator would be made with ballistics gel, which feels similar to human tissue. However, that gel tears easily. Given that the pterygopalatine block involves several manipulations of the needle, the team had to determine if silicone would preserve the feel of human tissue when poked with a needle while being durable enough to resist tearing. 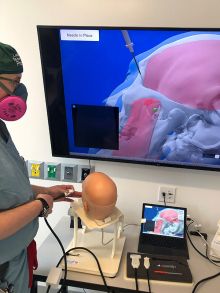 “If the needle touches the bone, you can feel it,” Dr. Smith said. “It feels a lot like doing this for real.”

The simulator uses magnetic technology to track the location of the needle and evaluate performance.

“It’s a much more comfortable way for most people to start doing this, where they can have a real 3-dimensional visual picture of where they’re putting this needle and a better understanding of what they’re doing and not doing without having to put a patient in the way,” Dr. Smith said.

Verification and validation of the simulator will occur over the next year. The plan is to train one group of residents and fellows on the block using the simulator and another group in the operating room with real patients. The groups will be compared to determine if the simulator is at least as good as teaching at the bedside but with less risk to patients.

This phase is both exciting and nerve-racking, Johnson said.

“It’s very much a continuous learning process,” he said. “The engineers and clinicians work toward building the best simulation they can using their experience.”

The simulator is a valuable training tool not only for residents and fellows, but also for teaching faculty, particularly at the new UF Health The Oaks location. Ear, nose, and throat surgeons are among the providers who can use the block the most given its use in tonsillectomies. Providers treating chronic neck pain and surgeons performing endoscopic nasal and sinus surgeries also use the block, which can reduce surgical bleeding in addition to treating pain.

“It’s a tool to try and safely teach people to do a relatively easy but mentally scary technique,” Dr. Smith said of the simulator. “I think it has the potential to be widely used through our department and maybe external to the institution as well.”

The simulator could travel beyond that as well.

“We hope the simulator will also lead to invitations for Dr. Smith and faculty to conduct hands-on workshops nationally and internationally once the pandemic is over, as the simulator is designed to withstand travel,” said Sem Lampotang, PhD, FSSH, FAIMBE, Professor and Director of CSSALT.